On Monday 27th April 2015 children across the school took part in one of the biggest weeks of 2015...Election Week.

During this week, children were involved in various activities and even participated in their own mock election in attempts to deepen their understanding on their right to vote.  At the end of the week, children were very excited and were openly discussing the topic with each other and staff. 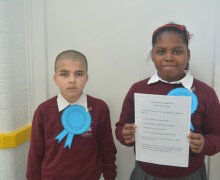 Mrs Jacob commented on how the children’s knowledge had increased enormously. “Hearing children debate with their friends about which party they or their parents may be voting for with clear reasons, really showed me how much the children were passionate about what they had found out and learnt across the week.  Younger children were able to tell me about the Prime Minister and his role within the Government”. Jonathan from Year 5 said ‘It was cool because we got to think about things to make our school better.  Can we have one every year?’

The purpose behind the week was to strengthen and deepen children’s understanding of everything they learnt in British Values Week and additionally to make them aware of the Government’s role within the United Kingdom and the election process, as well as the importance of having a voice and a freedom to make choices. 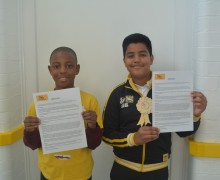 Children from Year 2 to Year 6 spent some time looking at the key parties and their manifestos and discussed which areas were important to them. Nursery and Reception designed rosettes and learnt the three key colours associated with the lead parties (Red, Blue and Yellow).

In order to promote our school election, Year 1 designed sign posts encouraging children to vote for the different parties.  They even went on to write about what rules they would put in place if they were to rule the country for the day. This process helped the children understand about laws, why we have them and the importance of following them.

Year 2 meanwhile, focused on what a vote is and why it was important to vote.  The children created a series of beautifully designed colourful posters to share their understanding.

Taking a historic approach to the topic, Year 3 looked at how the ability and opportunity to vote for different members of society has changed overtime.  The children researched the Suffragettes, creating a wonderful fact file about them.

Further along the corridor in Year 4 the children took part in discussions and debates on whether the age for voting should be lowered. Listening in on the action, it was lovely to see the children really thinking deeply about the topic and their answers – some of which came as a surprise.  ‘I think the age should be lowered as not being able to vote makes us feel we are not a part of society.  That we are disconnected.’ – Lora.

‘No, I don’t think the age should be lowered as we are not mature enough.  There is also a lot about politics we don’t understand.  I think 18 is a good age.  We will know more about life and politics at that age.’ – Adrienn.

Year 5, played the most vital role of the week.  Each class was given a party to represent. 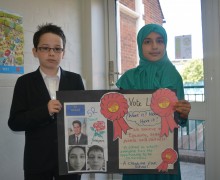 They had to write up their own manifestos about how to improve the school.  Two children from each class were then picked to represent the party who came suited and booted going from class to class to convince the children to vote for them.  When asked what it was like being Politician for the day Nataniel replied ‘It was hard work because it took a lot of preparation.  We also had to answer questions from all the children some of them we didn’t even know the answers to.  We had to think quickly.  When I used to see them (politicians) I thought it was an easy job but now I know it is really hard!’

In Year 6, children learnt the names of historical politicians such as Winston Churchill and Margaret Thatcher.  ‘You hear these names all the time.  It is nice to know about why these people are famous.’ – Ed

Ending the week with a big bang, the children from the School Council organised and held a general election in the school hall.  Here they greeted over 500 eager pupils.  The children did a circuit of the hall; collecting their ballot papers, going to the booth area to vote and then placing their vote in a big black box.  ‘Election week was so fun.  We got a chance to think about topics that were important to us.  It was a great opportunity to have our voices heard’.

After counting hundreds of votes the winners of Election week were Labour (5R) who won with a strong lead.

The two representatives of the winning party will now have the opportunity to spend the day shadowing Mrs Jacob and Mr Robinson to see what being a leader involves.